I like the movie “Bruce Almighty” although I avoided it for a long time because I had expected that, in addition to being theologically inaccurate, it would be crass and crude (I’ve seen other Jim Carrey movies!).  Well, there are some things that are offensive to people who are trying to be pious, but it also has some very good take away messages whether you are a “believer” or not. 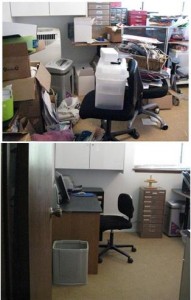 Ready to FINALLY lose the clutter?

One of the main points was to “be the miracle”.  This is not a new message.  Ghandi is quoted as saying, “Be the change you want to see in the world.”  We don’t tend to think like that anymore.  We have become willing victims of fate, society, rotten parents, the stars – whatever makes the most sense to the individual.  Anyone who is successful is called “lucky” or is accused of getting ahead by dishonest or dishonorable means.

However, the old saying is quite true:  “If you want to get something done, you have to do it yourself.”  I’m trying to build my business and I get into moods where I blame the apparent lack of progress on something other than myself.  The bottom line is if I REALLY wanted to succeed, I would find a way to do it.  We always find a way to get what we want, if we want it enough. (Of course, the big problem is that we don’t really know what we want, but that’s another blog entry!)

Do you really (and I mean REALLY, REALLY) want to be organized, out from under your chaos?

Then it’s up to you. You have to be the change you wish to see.

It starts when you put the DVDs back in the case after watching the movie and then put the DVD back on the shelf, instead of leaving it on the floor in front of the TV or on the coffee table where it ends up being a coaster for somebody’s Coke.  Or putting the laundry away after folding it, instead of drawing clothing out of the laundry basket.  It takes daily practice doing the small things even when we don’t feel like it.

And that’s the real secret to change.  Whether we feel like it or not, if we want a decluttered home, an increase in business or improved relationships, we have to change ourselves.  That’s all we have control over – ourselves, our actions and our reactions.  So take charge and be the miracle in your own life.