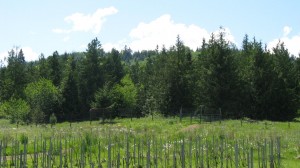 First, a little background: My husband and I purchased 12 acres in the Pacific Northwest in 2005. The property was largely undeveloped. Half of the land is wild and beautiful forest with cedars, alders and a variety of fir trees. The other half had been a llama ranch at some point. Some fencing remained around pasture areas and there was a small shed.

In one of our less rational moments, we thought it would be a brilliant idea to plant a vineyard in part of the open field.

And in our typical over-enthusiastic way, we decided that we would mimic the techniques used in Champagne France. All the vines were planted by hand (with the help of Camaraderie Cellars wine club members) and our rows were close together. No machinery would be used on OUR plants!

We planted over 2000 vines between 2007 and 2008, but have yet to yield any fruit. This year we are seeing less bud break than ever. It was heartbreaking, to say the least. All that money, all that effort…

We finally decided it was time to clear out (declutter, if you will) at least two areas where the grape plants were least vital. We pulled the stakes that we had spent so much time setting and removed the plants so that we would have open fields again. When we were faced with a plant that did have foliage, we would hesitate. Were we doing the right thing? Would we regret taking out a living, albeit non-producing, plant?

All the emotions and decisions involved in this process are the same ones that we go through when we declutter a home. In the “things” we have accumulated over the years, we come face to face with the results of our decisions – poor decisions, expensive decisions, failed decisions.

There’s a temptation to hang on, to keep trying to make it work in order to justify the time and expense. But at some point, we need to acknowledge that it’s time to move on.

We are experiencing the pain of regret as we “undo” the vineyard, but we are also moving forward instead of staying stuck amidst a dying dream.

Now that the two areas are cleared of plants and freshly mown, there is a sense of space and freedom. Once more there is room to grow. And that’s how decluttering works…

Have you had a decluttering experience that was initially painful, but ended up well? Tell us your story in the comments!